A trip to Procida and Ischia

Procida is a small island of the Flegree group, measuring approximately 4 sq. Km. It is located at the entrance to the Gulf of Naples, between Ischia and Capo Miseno, from which it is separated from the homonymous canal. Procida is a volcanic island with irregular shape and jagged shrubs.

Procida is an island of fishermen "married to the sea" for both fishing and working on ferries or merchant fleets and preserves the traditions associated with sea life intact.

Procida was often cut off from traditional tourist itineraries, but in recent years it has developed greater hospitality towards Tourism. Procida is in its simplicity a place full of charm, different from Capri or far from the hustle and bustle of Ischia but at the same time its naturalness makes it a very unique and unique island.

You have to spend a day, or two more, to explore it well.
The FLOTTA CAREMAR ferries to Procida depart from Naples from the port of Calata Porta di Massa, while the fast drives (hydrofoils) leave Naples from the Pier of Beverello.

And all CAREMAR ships arrive at the Port of Procida Marina Grande.

Excursions, views and typical places the island of Procida.

The dominant building of Terra Murata is the Palace of Avalos, built in the 15th century along with the walls of the D'Avalos family, the governors of the island until the '700. In 1830 the building was transformed into a prison and was definitively closed only in 1988.

The former Carcere consists of an urban intervention realized in the late XVI century by Cardinal Innico d'Avalos by the Cavagna and Tortelli architects, and was the Royal Palace and then the Royal Palace of the Bourbon, which in 1815 turned it into military school and then in the prison of the Kingdom with subsequent extensions. The Monumental complex consists of the Palazzo D'avalos, the courtyard, the Guards Barracks, the Single Cell Building, the Veterans Building, the Medicheria, the House of the Director, the Spianata Agricultural Estate.

To have a particular view of the Borgo view from above, it is important to look back at Corricella, a fishing village built on terraced houses with domed roofs and painted with the most colorful colors, from that side you can Admire a wonderful view of the Borgo. Corricella is known to those who recall the film "Il Postino: The Postman" (1995), a film that last seen Massimo Troisi's most prominent feature film was shot there.

Procida for its typical island features will be a true paradise for lovers of fresh fish and seafood dishes.

Ah, I would not ask myself to be a seagull, not a dolphin; I would be happy to be a redfish, which is the worst fish of the sea, even though I find myself there, joking in that water.

A book to read to capture interesting insights on the island of Procida. Set around 1938. Arturo Gerace was born on the island of Procida and lives there all the childhood and adolescence. The island encloses all of its world, and all other places exist for him only in the dimension of legend. The story of the boy is 60 years old, in his many nuances and teenagers' tearings, all of us, told by Elsa Morante in the book that gave her popularity 'The Island of Arturo', winner of the Strega Prize in 1957.

There are many small beaches and Lidi that I can spend some hours at the sea.

At the end of the excursion the FLEMAT CAREMAR ships are available for those who want to return to ISCHIA and / or NAPLES departing from the port of Procida Marina Grande. 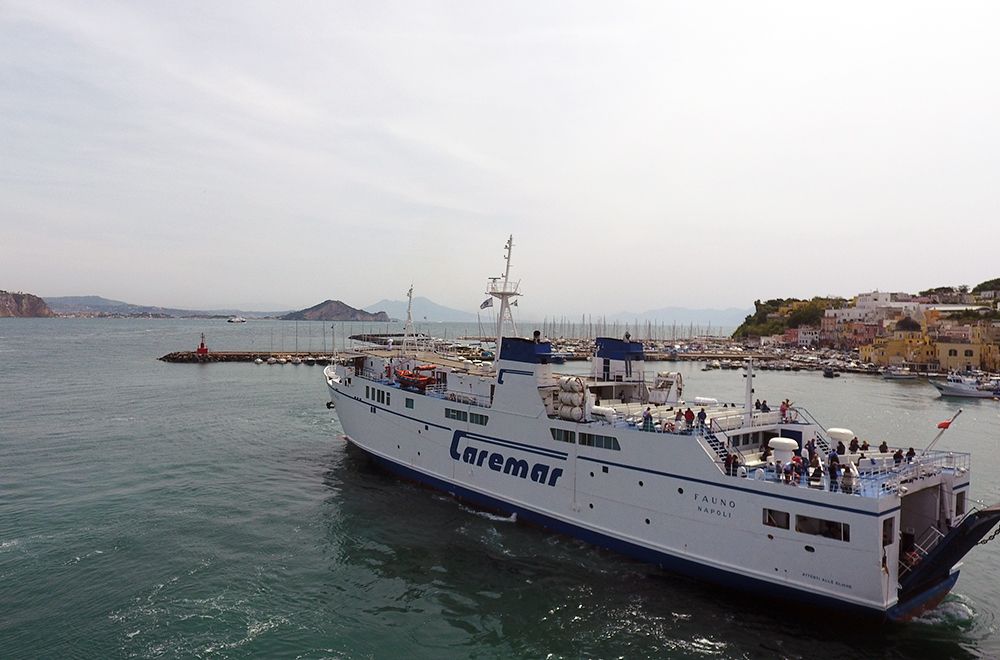 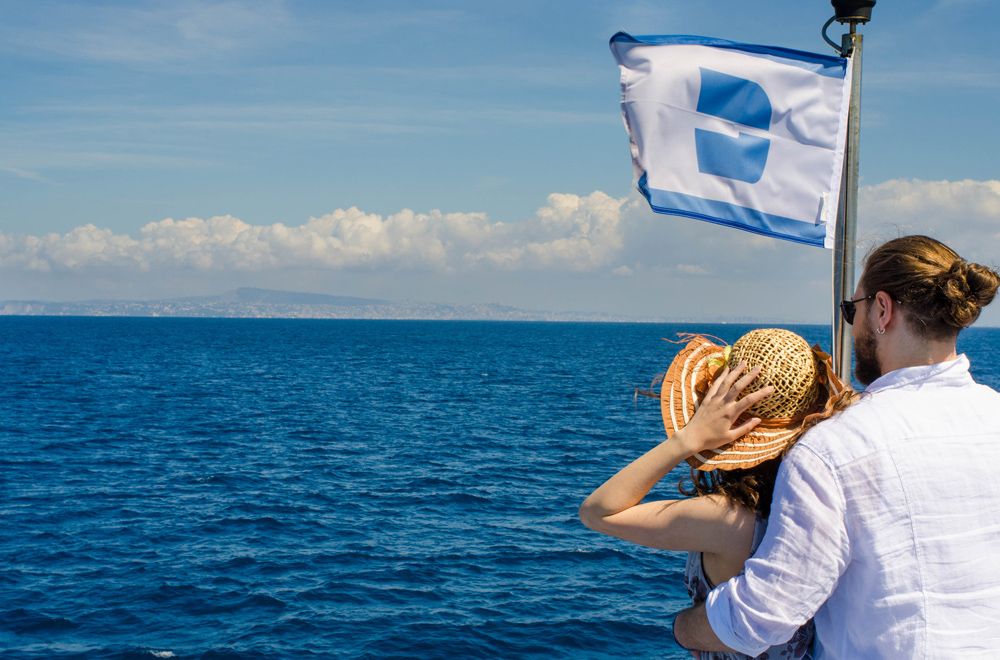 The Maritime Companion CAREMAR connects every day, with its Navy fleet, 7 ports of the Gulf of Naples.

The island of Ischia is the largest in the archipelago of the Flemish Islands and is located in the Gulf of Naples, not far from the island of Procida. From the city of Naples it is easy to reach by sea links that CAREMAR Company makes available by ferry or fast ferries and hydrofoils. It is also possible to embark on cars or motorbikes. ISCHIA island territory is volcanic and this has allowed the island to become one of the largest spa centers in Italy, with facilities that utilize state-of-the-art technologies and offer therapeutic treatments for every type of pathology.

The town of Ischia is the first place to see. From Porto, continuing to the Right Bank, up to Via Roma and Corso Vittoria Colonna you arrive at the characteristic hamlet of Ischia Ponte. A pleasant walk for the alternation of proposed environments and situations. The Right Bank, or "droite shore", is a narrow street, especially popular in the summer, with many restaurants, pubs and American bars, while for Via Roma and Corso Vittoria Colonna, the definition of a "natural shopping center" certainly applies. A walk, therefore, in a single integrated environment harmoniously with high fashion stores, prêt-à-porter, bars, restaurants, taverns, discos. So much to live as an experience in Ischia.

Important advice, especially in high season when you arrive at the Port, to buy back CAREMAR Ticket Office Ischia Redentore and Casamicciola.

Ischia Ponte is the indispensable destination if you really want to understand what is the Mediterranean architecture, typical of the patrician palaces that of the fishermen's houses. At the end of the village, connected to the mainland by a stone jetty, stands the Aragonese Castle, which is a bit of the symbol, the cover image of the whole island. It's worth visiting when it's open. There is also a lift that saves the toughness of the ascent in the absolute place full of fascination and history of all Ischia.

In Ischia you have to visit the thermal parks, considered the sanctuaries of wellness. The Poseidon Gardens of Forio, at the end of Citara Bay, are the most famous of the island as well as one of the largest and most beautiful structures in Europe. There are thermal centers in the northern part of the island, which can be reached more easily from the port of Casamicciola, where CAREMAR ferries dock, to visit Negombo to Lacco Ameno and Castiglione to Casamicciola are all-around thermal baths where you can relax between Thermal pools of all sizes and temperatures, with private access to the sea, where you can alternate as the most agga thermal and sea.

Forio is the largest commune on Ischia of ISCIA has undergone several invasions by the Saracens for centuries, of which there are marked signs in local architecture. Along the coast are many towers of sight and defense, the most famous of these is the "Tower", the largest of the stone towers spread over the territory that had the function of sighting and the first line defensive from the corsair attacks. You immediately realize this particularity, before you even enter the San Gaetano square that is the lounge of the village. The old town has a particular charm with its noble palaces, typical narrow lanes, local painters' artisans, tiny crafts of ceramics, churches rich in history and art. In the 1950's, many artists from all over the world met in this town, attracted by the beauty of the places and the friendliness of the residents.

The other feature of Forio is the Churches. There are two Basilicas Minori, one dedicated to the patron Saint Vito, in addition to the splendid church of San Gaetano, that of San Carlo in Cierco and many others. There is the Relief Church, which for beauty and location deserves a separate discourse, in fact this church rises on a promontory overlooking the sea and, despite its architectural simplicity, blends together with the surrounding landscape, appreciable by 'Large terrace surrounding the building. Built in the middle of the 14th century in the Greek-Byzantine style, the church is the symbol of the town of Forio.

These are some of the travel ideas to spend a weekend full of experiences and returning aboard one of the FLOTTA CAREMAR ships the look will be turned to the natural beauties that ISCHIA Island offers and the thought of coming back soon. Have a good trip!

CAREMAR: 7 ports of the Gulf of Naples connected every day of the year.